Welcome to Our Parish! Located just north of the Merritt Parkway in Trumbull, we are easily accessible from both Fairfield and New Haven Counties.

We welcome all visitors for worship and fellowship! 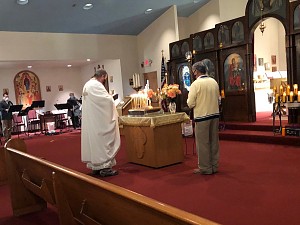 St. George was saddened to learn of the repose of one of its former pastors, the Very Reverend Daniel Montgomery, on August 12th.  Fr. Daniel and his wife Prifteresha Maria (who predeceased Fr. Daniel in November 8, 2016) served the St. George parish for 11 years beginning in 1976.  Memory Eternal!

Please go to our Parish History section;  https://stgeorgetrumbull.org/parish_history  -  you can find, about 1/2 way down, a small description of the parish's history for Fr. Daniel's time at St. George.

When Father Daniel was informed that he was dying, he smiled and replied calmly, “Well, I’ve had a good run.” (96 years) “I’m curious to see what comes next!” His faith imbued him with an inspiring serenity as he faced his final month of life. And what a life it was.

Born in Bryn Mawr, PA to an old Quaker family, he enjoyed a private education at the Haverford School until 1942, when he enlisted in the Army Air Force. Her served during WWII in Europe as a radio operator in the Ninth Tactical Air Force and later in the First Franco-American Tactical Air Force, participating in seven campaigns--among them the Normandy campaign and the Battle of the Bulge.

After the war he went to Mexico, graduating from Mexico City College--now, Universidad de las Américas, with a degree in history. In 1947 he married María Luisa Tamborrel (1925-2016) and enjoyed a marriage that lasted sixty-nine years. The couple had three children: Dr. Sylvia Montgomery Shaw, Louise Montgomery Snyder (who died in 2018), and Robert A. Montgomery who served his country with distinction with several posts in Asia and in Afghanistan. Father Daniel was blessed with twelve grandchildren, and in the last two years of his life with four great grandsons.

He was a scholar, an educator, a writer, a lecturer, and a devoted priest. He had a facility for languages, a Master’s degree in Spanish literature, published articles on Eastern Christian mysticism, and two books on Buddhism. He was co-translator of The Lotus Sutra from Chinese to English. His best-known work, Fire in the Lotus, was published in England in 1991 and was later translated into Spanish. But perhaps his greatest legacy springs from his quest for God.

That search took him to Princeton University Seminary, Philadelphia Lutheran Seminary, and finally to private studies with the Orthodox bishop who ordained him. Starting in 1956 Father Daniel served parishes in Vicksburg, Mississippi; Cedar Rapids, Iowa; Beaumont, Texas; Trumbull, Connecticut, and Kerrville, Texas. Even during his years as an educator, when he was department chair of foreign languages at Valley Forge Military Academy and was awarded Outstanding Secondary Educator of America (1975), he served as chaplain to Orthodox cadets.

One of his Connecticut parishioners wrote to him on Easter in 2019, summing up the great value of his life: “You were a wonderful teacher. Your sermons provoked thought and discussion in our home. You nurtured our love and understanding of the Orthodox faith without being showy or pedantic. You encouraged us to be the best of ourselves and to find His peace in our hearts. You taught us about faith, kindness, tolerance, and hope. You guided our approach to the chalice with free, open, and humble hearts. You led by example. YOU were a gift to all of us!”

Father Daniel slept peacefully for the last three days of his earthly life. The day before he died, he suddenly opened his eyes, his face radiant with surprise and delight. Then he closed them for the last time. On the evening of August 12, 2020, he slipped gently into the Lord’s arms. 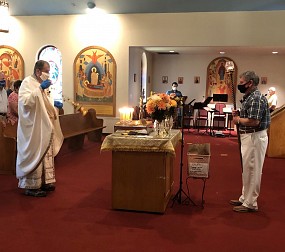 Father Gregory was tonsured at Holy Cross Monastery in Wayne, WV on Aug 27th.  This is the next important step towards Fr. Gregory becoming a monk.

A tonsure is the cutting of the hair on the head. All Orthodox Christians are tonsured at our baptism – a sign of our being dedicated to God. This monastic tonsure is a confirmation of that pledge.

Please click on the following link to view the original announcement which includes letters from Sharon and Greg Buzi to the St. George parish, and an email from Fr. Seraphim, Abbot of Holy Cross Monastery, to the Buzi’s:  https://stgeorgetrumbull.org/news_200817_1

The parish of St. George continues to pray for Father Gregory and the whole Buzi family as he progresses on his journey.

Please click onto the attached link of the Sixth Hour service (12 Noon service) on August 27th. Br. Gregory can be heard reading the Sixth Hour prayers (begins at the 5 minute mark of the video) to prepare himself for his tonsure. https://www.youtube.com/watch?v=c9uEhKzMGbI

To view Fr. Gregory's tonsure, please click onto the following link.  The tonsure is after the Vigil service, at approximately the 3hr, 42min, 15 sec mark. and lasts about 18 minutes. https://youtu.be/QOAppusvDWQ

During the last week of June, the Parish Council received approval from Metropolitan Tikhon, Locum Tenens of the Albanian Archdiocese, for St. George to begin a gradual re-opening based on pre-approved guidelines.  The first service held was Divine Liturgy on Sunday, July 5, 2020.

The number of parishioners allowed inside for Divine Liturgy is capped at 40.  This is based on current civil (Connecticut) guidelines, which is for a maximum of 25% of capacity.

These guidelines, procedures, and plans are not negotiable and require all to collectively cooperate and respect them. They are in place to maintain everyone’s safety and well-being, and were written to follow the guidelines provided by the State of Connecticut, and the Phase 1, Stage 1 guidance outlined in the Holy Synodal Guidelines (May 1, 2020). Before deciding whether or not you will be able to participate in person, please take the time to read the following three attachments:

For members who do not have email, a copy of the "Guidelines for re-opening" was mailed to them on Friday, June 26th.

Thank you for your patience and cooperation as we navigate the COVID-19 challenges. Note for Sundays - WIth the restricted re-opening of St. George for Sunday Divine Liturgies, Fr. Sergei will be video recording his sermons each Sunday in the church. They will be posted on St. George's YouTube Channel after Divine Liturgy. Because of time required to edit, format, and process the video for viewing, they will not be available to view until Sunday afternoons.  The following link will take you to St. George's YouTube Channel:  https://www.youtube.com/channel/UCvDnJSwwffvezBVH7P8u0bg

Prayers for use at Home:  the following link contains recommended sets of prayers to be used at home for those unable to attend due to specific health risks:

Click on the following to view additional Resouces that are available for use during this period of suspended services:   RESOURCES during COVID-19 pandemic.


Sunday, October 4th
17th SUNDAY AFTER PENTECOST
9:15AM General Confession
9:30AM Divine Liturgy
(St. George is operating on a restricted re-opening for Sunday Divine Liturgy only - please view the approved guidelines for attendance)